This is who we are… and how we went from dream to reality.

Hi, I’m Jeanne Wehri and my husband Jerry and I own Mohican River Retreat House.
Jerry comes from a family of ten children and grew up on dairy farm. He attended Ohio University and then worked at St. Rita’s Medical Center in Lima. After forty-one years of work as a medical laboratory technologist, he retired and needed a new project. The Mohican River Retreat House was a way to use some of the skills he developed over the years.
I (Jeanne) am the oldest from a family of six children. I’m a Registered nurse and am in my 39th year employed by Mennonite Memorial Home in Bluffton, Ohio. While I love my job at MMH my favorite pastime is decorating. Designing, furnishing, and landscaping this house has been a true pleasure for me. 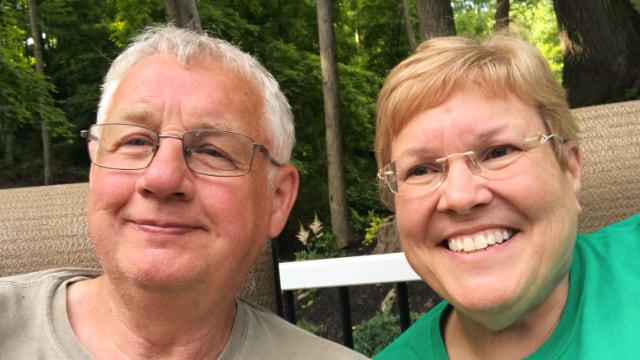 We invite you to book a stay in our Mohican River Retreat House sometime soon!
Book it Now!

We purchased the property in January 2018. Jerry and I initially planned to fix up the existing house (built in the mid 1940’s) but quickly realized most of it was not salvageable. We tore it down with the help of some of our family, piece-by-piece to the foundation, loading multiple dumpsters by hand.
My cousin, Bob Thompson of Vetter Lumber in Bluffton Ohio, helped us firm up plans for a new house using the existing foundation and graciously adjusted those plans several times as we redesigned it to meet our needs. 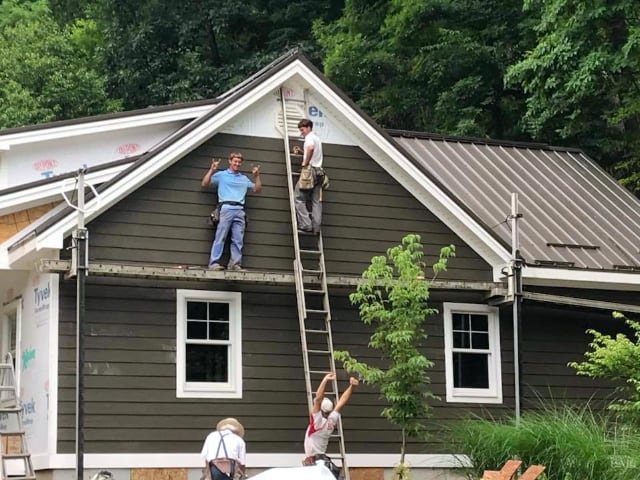 We hired a wonderful Amish crew led by David Schlabauch from Baltic to frame, roof, and side the house. They were able to get a lot of work done in a short time.
Our bonus son-in-law and electrician Yousif Mansi and some of his crew put in our electric panel and lines, Jerry put in the plumbing, his brother Bob Wehri helped Jerry put up the drywall, and my Dad, Emerson Basinger, helped with the building process when needed. I painted with the help of Jerry, my son Joe Sehlhorst, and my friend Beth Boehr. My sister Julie and brother-in-law Doug Oberly helped with the trim. Jerry, Dad, and I put down the flooring. My nephews Jeremy Basinger, Ryan Brauen, my brother Jon Basinger and brother-in-law Don Brauen used their skills to plan, move the dirt around, and tile the ditch between the properties to improve the landscape.
My friend Beth and I spent a lot of fun and fruitful girl-friend time shopping in local thrift stores, antique shops, and furniture stores to furnish and decorate the house.
The process has been a lot of work, especially for Jerry, but with the help of family and friends the end result is a lovely house in a peaceful setting that we are proud to share with others who want some time to rest, relax, and get away for a while. – Jeanne Wehri

Out with the old…

The original house on the property was built in the middle of the last century. It was in poor condition and not really repairable to the standard we expected to achieve. We decided to demolish the old house down to the foundation and build a new house to our specifics.
We used five 30-yard dumpsters to remove the old house where most of the work was done by three different people. We hacked it apart into smaller pieces so that we could carry it to the dumpster. We found that if you take Aleve before going to bed, you could move the next morning.

In with the new…

The new house was framed by the Amish and all the other work was performed by us with the aid of other professionals. Drywalling and mudding the house was done by my brother and myself. After two 30-packs and a 12-pack of Busch Light beer, we had the job done. (Drywall dust tastes much better with beer!)

The back deck was constructed in December during freezing temperatures. That was over 2,000 screws installed where I was on my hands and knees. I was still sweating but my fingers and toes were freezing.
Jeanne designed the house and put her touches to the interior design. She loves doing interior decorating and is very good at it.
We are so glad we did it this way because the outcome was just what we expected.
We wanted the house to be a very comfortable place to come back to after a day of activity.
There is nothing better than returning to a nice home with all the amenities available to enjoy. When we stay at the house, we find it to be very comfortable and relaxing.
We hope all guests come away with the same feeling. – Jerry Wehri